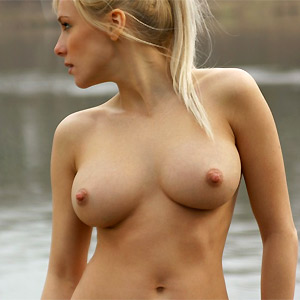 Yanina – By the River

Another of beautiful Yanina's Femjoy sets, of which I think there are now six, photographed in 2005 by Gribanov. According to MetArt, who also call her Yanina, she's from Ukraine, and is around 28, so was about 25 when these were shot. Yanina is very lovely, a one hundred percent real natural woman with a truly awesome bod and gorgeous pale blue eyes. I've a feeling that well rounded bod may have slimmed down a touch for her later MetModels stuff, but she's a captivating beauty on any account. Always more than happy for Yanina to visit us!

Easily the best offering today. Lovely bod, nice smile - and either it was very cold or her nips are just to die for!!

She is naughty and cute!